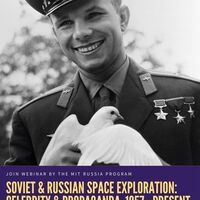 Sixty years ago, on Apr. 12, 1961, Soviet cosmonaut Yuri Gagarin became the first human to fly into space. An important breakthrough in the Space Race, his flight is widely celebrated in Russia and beyond even today. Please join the MIT Russia Program for a conversation about the political and religious functions of the cult of Yuri Gagarin, both during his life and afterwards. The speakers will also discuss the rise and fall of Soviet space utopianism as it intersects with politics and ideology.

Andrew Jenks is Professor of history at California State University, Long Beach. He is the author of a biography of Yuri Gagarin (The Cosmonaut Who Couldn’t Stop Smiling: the Life and Legend of Yuri Gagarin) and most recently of the forthcoming When the Space Race Ended: Collaboration in Space and the Search for Peace on Earth, with Anthem Press.

Victoria Smolkin is Associate Professor of history and Russian, East European, and Eurasian studies at Wesleyan University. A scholar of Communism, the Cold War, and Russia and the former Soviet Union, her work focuses on the intersections of politics with religion and ideology, including atheism and secularism. She is the author of A Sacred Space Is Never Empty: A History of Soviet Atheism (Princeton University Press, 2018). Smolkin's interests extend to utopianism, and how it figures time and space through engagements with death and cosmic exploration.

Kate Brown is Professor of Science, Technology and Society at the Massachusetts Institute of Technology. She is the author of several prize-winning histories, including Plutopia: Nuclear Families, Atomic Cities, and the Great Soviet and American Plutonium Disasters (Oxford 2013). Her latest book, Manual for Survival: A Chernobyl Guide to the Future (Norton 2019), translated into nine languages, won the Marshall Shulman and Reginal Zelnik Prizes for the best book in East European History, plus the Silver Medal for Laura Shannon Book Prize. Manual for Survival was a finalist for the 2020 National Book Critics Circle Award, the Pushkin House Award and the Ryszard Kapuściński Award for Literary Reportage.