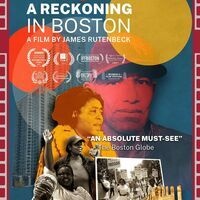 "A Reckoning in Boston" Film Screening and Live Q&A

Join the MIT List Visual Arts Center for a screening of A Reckoning in Boston, directed by Boston-based filmmaker James Rutenbeck. This documentary is an intimate look at the roots of systemic racism as it plays out over generations in Boston. It is an open and honest exploration at how to promote healing and growth among Black members of the community while unpacking and confronting white privilege as a means to create change.

After the screening, director and coproducer/subject, James Rutenbeck and Kafi Dixon will host a Q & A discussion.

The film screening will take place on December 2nd, 2021 in the Bartos Theater at 7 PM.

This screening is presented at the List Center in conjunction with Sreshta Rit Premnath: Grave/Grove which is currently on view in the List Center galleries. This exhibition poses questions in a larger context of care, community, and perhaps most pertinent questions of space, who is it for, who can own or occupy it – and A Reckoning in Boston brings localized understandings of Boston’s economic and racial inequities. We invite attendees to visit the exhibition prior to the film screening.

This event is made possible by the partnership and collaboration of MIT’s Women’s & Gender Studies Program, the Environmental Solutions Initiative, the Department of Urban Studies and Planning, and the List Visual Art Center.

Kafi Dixon: A Black woman, an urban & rural farmer and a generational New Englander, in 2017 Kafi Dixon founded Boston’s 1st Cooperative for Women and its 1st Worker / Owner Urban Farm Food Coop. Initially named the Women of Color Co-op, in embracing women of all races, class and culture the co-op was renamed Common Good Co-op. In response to the socioeconomic experiences of lower resourced and impoverished communities, and the intimacy of community violence women in Boston experience, as producer of A Reckoning Boston Kafi shares her experiences, hopes, and perspective as she asks us to bear witness to the systemic violence and interrogate resolutions.

James Rutenbeck is a two-time recipient of the Alfred I. du Pont Columbia Journalism Award for his work as episodic producer of the PBS series, Unnatural Causes: Is Inequality Making Us Sick? (2008), about health disparities in the U.S. and Class of ’27 (2016), which he executive produced, directed and edited. Class of ’27, which explores the lives of young children in three rural American communities, aired on the World Channel series America Reframed and streams as Editor’s Pick at The Atlantic. James’ films have screened at Cinema du Reel, Museum of Modern Art, National Gallery, Margaret Mead Film & Video Festival and Robert Flaherty Film Seminar. His feature film Scenes from a Parish, about cultural change at a working-class Catholic parish, aired on Independent Lens in 2009. A Reckoning in Boston premiered at Big Sky Documentary Film Festival in 2021 and has been screened at many festivals, including Morehouse College Human Rights Film Festival, where it won Best Feature Documentary. The Sundance Documentary Fund, LEF Moving Image Fund, Southern Humanities Media Fund and Corporation for Public Broadcasting have supported James’ films. Editing credits include the forthcoming NYTimes Op Doc Disability Road Map Project and God in America, Zoot Suit Riots, Jimmy Carter and Roberto Clemente for the PBS series American Experience and American Denial and Herskovits at the Heart of Blackness for Independent Lens. James was a 2019/20 Fellow at the Film Study Center at Harvard University and 2021 Poynter Fellow at Yale University.