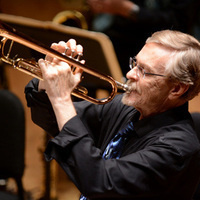 In conjunction with 21M.342 Composing for Jazz Orchestra

The concert will feature original compositions by MIT Senior Lecturer Mark Harvey from the new CD “Democratic Vistas” on Leo Records. The featured work will be the “Swamp-A-Rama” Suite, including pieces such as “Trumputin Tango,” “Fake News Blewz,” and “De-Evolution Blues” as well as “No Walls,” Aardvark’s anthem of hope and inclusivity.

About The Aardvark Jazz Orchestra

Founded in 1973, The Aardvark Jazz Orchestra has been a force in the international jazz scene for more than 40 years. Aardvark is one of the longest-running large jazz ensembles in the world. The band is well known for its wide-ranging shows, from new music by founder/director Mark Harvey to classics and rarities by Duke Ellington, Count Basie, Mary Lou Williams, Miles Davis, John Coltrane and other jazz legends. Aardvark has given premieres of more than 175 works for jazz orchestra, performs widely, and appears on 14 CDs, including 8 discs from Leo Records, one of the world’s leading adventuresome music labels. Guest artists who have appeared with Aardvark include jazz luminaries Jaki Byard, Sheila

Composer/trumpeter ​Mark Harvey is the founder and music director of the Aardvark Jazz Orchestra and teaches jazz studies and composition at MIT. Harvey has performed in major venues including Fenway Park and Symphony Hall, Boston, the Knitting Factory and the Village Gate (NYC), the National Gallery of Art (DC), the Left Bank Jazz Society (MD), the Southern California Institute of Architecture (CA), the Berlin Jazz Festival (Germany), and the Baja State Theater (Mexico). His musical credits also include recordings with George Russell’s Living Time Orchestra (Blue Note), and Baird Hersey & the Year of the Ear (Arista/Novus) and appearances with Gil Evans, Howard McGhee, Sam Rivers, Claudio Roditi, and other notables.