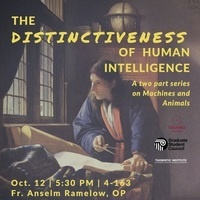 Marie George has been a member of the Philosophy Department since 1988.  Professor George is an Aristotelian-Thomist whose interests lie primarily in the areas of philosophy of nature and philosophy of science.  She has received several awards from the John Templeton foundation for her work in science and religion, and in 2007 she received a grant from the Center for Theology and the Natural Sciences (CTNS) for an interdisciplinary project entitled:  “The Evolution of Sympathy and Morality.”  Professor George has authored over 50 peer-reviewed articles and two books:  Christianity and Extraterrestrials? A Catholic Perspective(2005) and Stewardship of Creation (2009).  She is currently working on Aquinas’s “Fifth Way,” and also on a variety of questions concerning living things (self-motion, consciousness, evolution, etc.).  Professor George is a member of ten philosophical societies, including the American Catholic Philosophical Association, the Society for Ancient Greek Philosophy, and the Society for Aristotelian Studies.