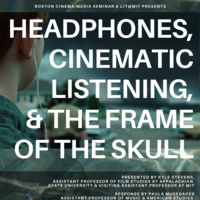 Listening via headphones is increasingly ordinary. Headphones have become one of the cyborgian devices that mark our era, corking the head and furnishing a response to the age-old frustration that the ear has no lid. Scholarly accounts of the sonic aspect of audiovisual texts have considered technological changes over time (such as stereo and Dolby advances) but maintain the conceptual model of a spectator in a cavernous theatrical exhibition space.

My paper is interested in what happens when we use headphones to listen to movies, as we might when encountering a film on a range of domestic and mobile devices. What happens when a film’s sonic world is no longer part of a shared world? When its experience is not of the robust vibrations rattling our ears, feet, and guts in the auditorium but seemingly floating in the middle of our heads? Indeed, given that sound is essential to film’s nature as an intrinsically audiovisual medium, and that headphonic sound is so different from theatrical sound, I want to ask whether listening to a movie with headphones may constitute a new medium. I will also explore the idea that headphones transform each audience member’s head into the frame, and, in turn, indicating how this mode of aesthetic listening affects the politics and world-building of particular films.

Bio: Kyle Stevens is Assistant Professor of Film Studies at Appalachian State University and Visiting Assistant Professor at MIT. He is the author of Mike Nichols: Sex, Language, and the Reinvention of Psychological Realism (Oxford University Press), co-editor of the two-volume collection Close-Up: Great Screen Performances (Edinburgh University Press), and editor of the forthcoming The Oxford Handbook of Film Theory. His essays have appeared in Cinema Journal, Critical Quarterly, Film Criticism, World Picture, as well as several edited collections.

Launched in 2015, the Boston Cinema/Media Seminar is a meeting of film and media scholars from the many colleges and universities in the greater Boston area. Drawing from the pool of local scholars across the Boston area's many institutions as well as scholars visiting or in residence here, it runs along similar lines to seminars in other communities with high concentrations of scholars spread out across many institutions, bringing them together and encouraging a sense of community of people who work in related fields. Based on models such as the Chicago Film Seminar and the Columbia University Seminars, each meeting features a speaker who gives a substantial presentation of her or his work, followed by a formal response by an invited respondent, followed by discussion among the whole group, followed by dinner and further, informal discussion.

The benefits of having a seminar like this are manifold. Graduate students and scholars at the area’s colleges and universities--many of whom have only a handful of colleagues working in a related field at their home institutions--profit from access to a community of scholars beyond their own school. Further, they hear the most recent work in the field and have an opportunity to shape it as it develops. Speakers gain access to a subset of the audience their work is most interested in reaching, and the discussion that ensues allows engagement with the prevailing concerns of cinema and media studies for everyone. The seminar capitalizes on having a critical mass of brilliant people working in cinema and media studies in the area and provides an outlet and a forum for the development of their common interests.