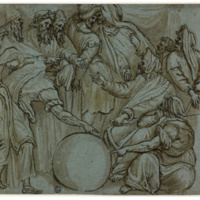 "Through the Slant of Night:" The Other Side of the Earth in the Sixteenth Century

The discoveries of Columbus focused attention on the newly discovered but barely known regions on the far side of the earth, a new zone of convergence where East and West met and crossed over into one another. It was now possible to think beyond the "inhabited world" known since Antiquity and to consider the earth in global terms, which is to say as a geometric object viewable from more than one side. The other side of the earth, where the New World formed the nearest part of an extended Asia, was now relayed to Europeans through a series of mediated images, almost immediately becoming a mirror for the European imagination. By considering several works of European sixteenth century art and literature, Alexander Nagel explores the dynamic reconfiguration of the world at a time when the imagination of globality was being framed explicitly as a problem of point of view, a problem that directly concerned practices of image-making and image-viewing.

--
Alexander Nagel is Professor at the Institute of Fine Arts, NYU. His interest in art and religious reform produced Michelangelo and the Reform of Art (2000, winner of the Renaissance Society of America’s Gordan book prize), and The Controversy of Renaissance Art (2011, winner of the College Art Association’s Morey book prize). His interest in the multiple temporalities of art led to the publication of Anachronic Renaissance (co-authored with Christopher Wood, 2010) and Medieval Modern: Art out of Time (2012). His current work addresses questions of orientation and configurations of place in Renaissance art and culture. In 2016, he received an NEH Fellowship for a collaborative project (with Elizabeth Horodowich, NMSU) entitled Amerasia: A Renaissance Discovery.