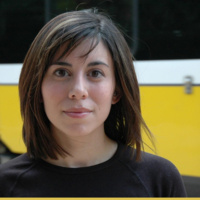 Hermanas Unidas at MIT invites you to join us for a virtual fireside chat, reading, and author Q&A with Cristina Henríquez.

During this webinar, Hermanas Unidas will host a fireside chat with Cristina, hear short excerpts of her work, and open up for Q&A with the audience.

Cristina Henríquez is the author of The Book of Unknown Americans, which was a New York Times Notable Book of 2014 and one of Amazon’s 10 Best Books of the Year. It was the Daily Beast Novel of the Year, a Washington Post Notable Book, an NPR Great Read, a Target Book of the Month selection, and was chosen one of the best books of the year by BookPage, Oprah.com, and School Library Journal. It was also longlisted for the Andrew Carnegie Medal for Excellence in Fiction and was a finalist for the Dayton Literary Peace Prize.

Henriquez is also the author The World In Half (a novel), and Come Together, Fall Apart: A Novella and Stories, which was a New York Times Editors’ Choice selection.

Her stories have been published in The New Yorker, The Atlantic, Glimmer Train, The American Scholar, Ploughshares, TriQuarterly, and AGNI, along with the anthology This is Not Chick Lit: Original Stories by America’s Best Women Writers.

Cristina’s non-fiction has appeared in The New Yorker, The New York Times Magazine, The Wall Street Journal, Real Simple, The Oxford American, and Preservation, as well as in the anthologies State by State: A Panoramic Portrait of America and Thirty Ways of Looking at Hillary: Women Writers Reflect on the Candidate and What Her Campaign Meant.

She was featured in Virginia Quarterly Review as one of “Fiction’s New Luminaries,” has been a guest on National Public Radio, and is a recipient of the Alfredo Cisneros Del Moral Foundation Award, a grant started by Sandra Cisneros in honor of her father.

Cristina earned her undergraduate degree from Northwestern University and is a graduate of the Iowa Writers’ Workshop. She lives in Illinois.

With many thanks to Mind Hand Heart for the grant that enabled this event.