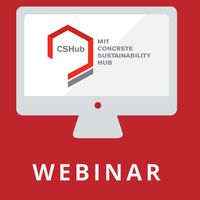 The United Nations predicts that nearly 70 percent of the global population will live in urban environments by the year 2050. This rapid urbanization is changing the surface of the planet, which has an impact on climate regionally and globally. CSHub researchers are studying the effects of albedo, which is the measure of the fraction of solar energy reflected by the Earth’s surface, on climate and the urban heat island effect (defined as a temperature difference between urban areas and their rural surroundings where the city temperature is higher). Lighter color surfaces have a high albedo and reflect light, while darker surfaces have low albedo and absorb light. CSHub researchers have developed an approach to quantify the impacts of changing pavement albedo on the climate and building energy demand and then translate both of those into global warming potential. This webinar will describe the approach and results from recent studies.

The MIT Concrete Sustainability Hub (CSHub) webinar series offers information of general interest to members of the building, paving, and construction communities, as well as to educators, students, journalists, and law and policy-makers interested in the environmental and economic impacts of decision-making concerning infrastructure. Videos of past webinars are archived to the CSHub YouTube Channel.

Webinars are free and open to the public. Presentations are geared toward a lay audience.