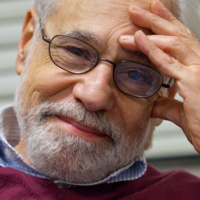 Co-hosted with Literature at MIT.

David Thorburn has been a teacher of literature for 55 years, 44 of them at MIT where he is Professor of Literature and Comparative Media and Director Emeritus of the MIT Communications Forum. Generations of MIT undergraduates have taken his lecture course, “The Film Experience,” which now reaches an international audience on YouTube. He was born in Manhattan and grew up in an old farmhouse in Randolph, New Jersey, before it became a suburb. He’s written a book on Joseph Conrad and many essays and reviews on literature and media. Knots is his first book of poetry.

"Poetic form here is as supple as the poet’s gaze: rhyme when it emerges is lightly shouldered, sweetly inplay with the vicissitudes of memory and the ceremonies of daily domesticity. Not a line goes slack, not a word is wasted." —Linda Gregerson

"Precision and ardor. The blunt grace of compression. These qualities give David Thorburn’s Knots a distinctive authority. The title poem summons —and undoes— the intricate, oppressive, persistent and legendary bonds of patriarchal lore." —Robert Pinsky