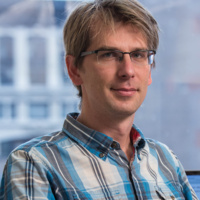 Abstract:
I will discuss the estimation of tail probabilities in complex systems governed by PDEs. The approach is guided by ideas from large deviation theory (LDT) and methods from PDE-constrained optimization. The systems under consideration involve random parameters and we are interested in quantifying the probability that a scalar function of the system state is at or above a threshold.  The proposed methods initially solve an optimization problem over the set of parameters leading to extreme events.  Based on solutions of this PDE-constrained optimization problem, we propose (1) an importance sampling method and (2) a method that uses curvature information of the extreme event boundary to estimate small probabilities. The application of the approach is demonstrated to quantify the probability of extreme tsunami events on shore. Tsunamis are typically caused by a sudden, unpredictable change of the ocean floor elevation during an earthquake.  We model this change as random process and use the one-dimensional shallow water equation to model tsunamis. The PDE-constrained optimization problem arising in this application is governed by the shallow water equation. This is joint work with Shanyin Tong and Eric Vanden-Eijnden from NYU.

Bio:
Georg Stadler is a Professor of Mathematics and Computer Science at New York University’s Courant Institute of Mathematical Sciences. Before joining NYU, he was a member of UT Austin’s Oden Institute for Computational Engineering and Sciences. He received a PhD in Mathematics from the University of Graz (Austria) under supervision of Karl Kunisch. His research interests are in computational inverse problems and uncertainty quantification, PDE-constrained optimization and parallel algorithms and solvers. His research is typically driven by real-world applications from engineering and the sciences. He received an ASCINA Award from the Austrian government in 2011, and is co-recipient of the Springer CSE Prize in the same year. He was a finalist for the Gordon Bell Prize in Supercomputing in ’08, ’10 and ’12 and a co-recipient of the Bell Prize in 2015 for illustrating extreme scalability of implicit solvers for nonlinear and highly heterogeneous indefinite PDE systems.  He also received the 2019 SIAM Computational Science & Engineering Best Paper Prize.