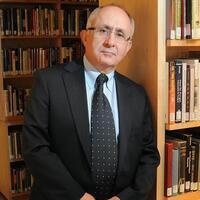 Emile Bustani Seminar: "Erdogan’s Second Republic (2018) compared to Ataturk’s First Republic (1923): Turkey’s 100-Year Journey and its Relationship with the Past"

"Erdoğan’s Second Republic (2018) compared to Ataturk’s First Republic (1923): Turkey’s 100-Year Journey and its Relationship with the Past"
Taner Akçam

Professor of History and Kaloosdian/Mugar Chair in Armenian History and Genocide, Clark University

On July 9, 2018, Recep Tayyip Erdoğan took his oath for office and became the first President of Turkey’s new presidential system, called “the Republican System of Government,” marking the death of the First Republic established by Ataturk in 1923. With his election and oath as president, Erdoğan demolished the old and replaced it with a new, Second Republic.

Those who set up the Second Republic claim that the current developments in the Middle East are very similar to those in the region during and after the First World War. They believe that as Turks, they have encountered a great siege and are in the midst of a new, existential war of life and death. Does the Middle East really live in a revived Post-World War I condition? Could this be one of the reasons for Turkey's gradual breaking from the West and its turn to Russia and the East?

If both the first and second republics were born as a product of similar conditions, what are the differences and similarities between them? How do these two republics face and confront their pasts, and is there is a possibility of a democratic Third Republic?

Historian and sociologist Taner Akçam received his doctorate in 1995 from the University of Hanover, with a dissertation on The Turkish National Movement and the Armenian Genocide Against the Background of the Military Tribunals in Istanbul Between 1919 and 1922. Akçam was born in the province of Ardahan, Turkey, in 1953. He became interested in Turkish politics at an early age. As the editor-in-chief of a student political journal, he was arrested in 1976 and sentenced to 10 years' imprisonment. Amnesty International adopted him as a prisoner of conscience. A year later, he escaped to Germany, where he received political asylum. In 1988 he started working as Research Scientist in Sociology at the Hamburg Institute for Social Research. His first research topic was the history of political violence and torture in the late Ottoman Empire and early Republic of Turkey. Between 2000 and 2002 Akçam was Visiting Professor of History at University of Michigan. He worked also as Visiting Associate Professor at the Center for Holocaust and Genocide Studies at University of Minnesota. He has been a member of the history department at Clark University since 2008.