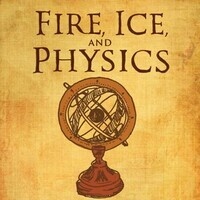 Join the MIT Press Bookstore in welcoming physicist and author Rebecca C. Thompson to discuss her latest book, Fire, Ice, and Physics: The Science of Game of Thrones.

Game of Thrones is a fantasy that features a lot of made-up science—fabricated climatology (when is winter coming?), astronomy, metallurgy, chemistry, and biology. Most fans of George R. R. Martin's fantastical world accept it all as part of the magic. A trained scientist, watching the fake science in Game of Thrones, might think, “But how would it work?” In Fire, Ice, and Physics, Rebecca Thompson turns a scientist's eye on Game of Thrones, exploring, among other things, the science of an ice wall, the genetics of the Targaryen and Lannister families, and the biology of beheading. Thompson, a PhD in physics and an enthusiastic Game of Thrones fan, uses the fantasy science of the show as a gateway to some interesting real science, introducing GOT fandom to a new dimension of appreciation.

Even the most faithful Game of Thrones fans will learn new and interesting things about the show from Thompson's entertaining and engaging account. Fire, Ice, and Physics is an essential companion for all future bingeing.

Rebecca C. Thompson, PhD, is a physicist and author of the popular Spectra series of comic books about physics. She is Head of the Office of Education and Public Outreach at Fermilab, the particle physics research facility near Chicago. She served as Director of Public Engagement for the American Physical Society from 2008 to 2019.