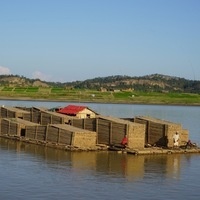 The Irrawaddy River is the major waterway and largest river in Myanmar. It flows from north to south and it is used by Burmese people daily to take baths, do laundry, wash vegetables, and transport goods for trade and other commercial purposes.

The vehicles used along the river include small homemade boats, tug boats, dredging boats, festivity boats, raft boats that move entire homes as the water level changes throughout the year. And then there are the tour boats. Among the tour boats are the Irrawaddy Flotilla river boats that go back to the days of the British Empire and were recovered and renovated in the last twenty years.

Camila Chaves Cortes has taken three trips in these boats watching the life, landscapes, and boats along the way. These inspired her to show these color photographs, cyanotypes, paintings, and a three-dimensional sculpture of one of the boats.