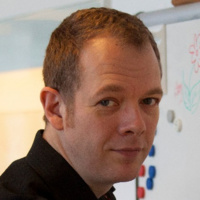 The chemical industry should in the future be based on renewable energy. Therefore, material development for environmentally friendly, electrocatalytic production of valuable chemicals is needed. Chemicals could be produced using safe, cheap, more environmentally friendly and more abundant reactants than today. The products could be provided on demand at the place where they are needed, reducing expensive and hazardous transport of chemicals. However, stable, efficient and selective catalysts have to be discovered. This requires insight into the surface chemistry at the atomic scale. Surface chemistry can be revealed based on density functional simulations. However, there are presently no atomic scale simulations or analysis that capture all the essential parts of the nature electrochemical interface. Thus the electrochemical solid/liquid interface represents one of the frontiers of atomic scale simulations.

I will give examples where the insight from simulations might pave the way for rational discovery of new catalyst materials and new electrocatalytic processes for sustainable production of fuels and chemicals. Some examples are: oxygen reduction to H2O2, Oxygen evolution and CO2 reduction reaction.

Since 2007, he has supervised more than 25 PhD graduate students and Post docs. He is co-author of more than 150 publications in peer reviewed journals, co-inventor of 6 patents, and co-founder of two startup companies. His research interests include: electrocatalysis, energy conversion, atomic scale simulations, rational interface design for catalysis.