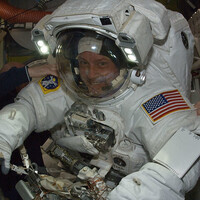 Please join the MISTI MIT Russia Program and the AeroAstro Department for a virtual conversation with NASA astronaut and MIT graduate Col. Michael Fincke in celebration of the 60th anniversary of the first human flight in space.  Moderator Piper Sigrest (AeroAstro ’18) will ask him about his experiences in training and in space, his use of the Russian language, the training he thinks is important to get while at MIT, and ways that MIT students might be able to invest their time in order to increase their chances of flying to space one day. Join us to hear answers to these questions and get a chance to ask your own.

Edward Michael Fincke (AeroAstro ’89) joined NASA as an astronaut in 1996.  He has flown into space three times, completed seven spacewalks, and spent a total of 381 days in orbit. He’s currently training for the first crew flight on Boeing’s CST-100 Starliner spacecraft. The vehicle will provide roundtrip crew transportation services to the International Space Station and, along with SpaceX’s Crew Dragon, restart U.S. space launches.

Fincke, who is fluent in Russian and Japanese, attended MIT on an Air Force Reserve Officers’ Training Corps (ROTC) scholarship and graduated in 1989 with a Bachelor of Science in Aeronautics and Astronautics as well as a Bachelor of Science in Earth, Atmospheric and Planetary Sciences. This was followed by master’s degrees from Stanford University in 1990 and from the University of Houston - Clear Lake in 2001.

Piper Sigrest (AeroAstro ’18) is a third-year aerospace engineering PhD candidate at the University of Michigan, concurrently pursuing a graduate certificate in Russian, Eastern European, and Eurasian Studies. Piper studied Russian for four years as an undergrad at MIT, and through MISTI MIT Russia, developed and led hands-on STEM workshops for middle and high school students in Kazakhstan and Russia in 2017 and 2018, respectively. In the summer of 2019, Piper studied abroad in Moscow and volunteered at the Memorial Museum of Cosmonautics. Piper is a 2017 Brooke Owens Fellow and has interned at NASA, Aurora Flight Sciences, SpaceX, Virgin Orbit, and Blue Origin. Piper is an aspiring astronaut, and seeks to engineer and fly crewed space missions after graduating.