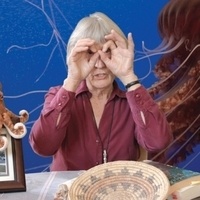 Organized by Rania Ghosn as part of 'Earth on Display: The Anthropocene Museum of Natural History', Experiments in Pedagogy

Donna Haraway is a prominent scholar in the field of science and technology, a feminist, and a science-fiction enthusiast who works at building a bridge between science and fiction. She became known in the 1980s through her work on gender, identity, and technology, which broke with the prevailing trends and opened the door to a frank and cheerful trans species feminism. Haraway is a gifted storyteller who paints a rebellious and hopeful universe teeming with critters and trans species, in an era of disasters. Brussels filmmaker Fabrizio Terranova visited Donna Haraway at her home in California, living with her – almost literally, for a few weeks, and there produced a quirky film portrait. Terranova allowed Haraway to speak in her own environment, using attractive staging that emphasised the playful, cerebral sensitivity of the scientist. The result is a rare, candid, intellectual portrait of a highly original thinker.

A filmmaker, activist, playwright and lecturer at the École de Recherche Graphique (ERG) in Brussels where he coordinates a postgraduate course in experimental narrative, he is also one of the founding members of DingDingDong, an institute devoted to informing the public about Huntington’s disease. In the field of audiovisual experimentation he has made two documentaries, Josée Andrei, An Insane Portrait (2010) and Donna Haraway: Story Telling for Earthly Survival (2016).