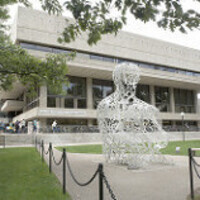 TITLE:  Does Quantum Work Even Exist?

One of the main problems in developing a consistent theory of Quantum Thermodynamics (QT) lies in the fact that quantities such as work and heat cannot in general be described by Hermitian operators whose eigenvalues would give their expectation values. This has culminated into the "no-go" theorem that states that it is impossible to construct such operators with proper physical properties [1]. The theorem can be circumvented by a Hamilton-Jacobi based approach to work, but in that case the total wave function of the system and the environment must be known [2]. In the simple limit of Markovian quantum evolution work and heat can be identified from the change of the system Hamiltonian and its density matrix, respectively. This is based on the Gorini-Kossakowski-Sudarshan-Lindblad (GKSL) picture, where unitary and dissipative parts of the system evolution can be conveniently separated. We have recently shown how any quantum evolution can be written in a generalized GKSL form, with time-dependent transition rates [3]. Using this picture I will show how one can develop an unambiguous formulation of QT, and the First Law in particular, based on trajectories of the density matrix from the generalized GKSL equation [4].