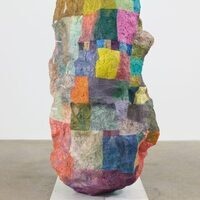 It is often assumed that Conceptual Art pivots on bureaucratic means of communication such as text and documentary photography, and that it performs a dematerialization of traditional media such as painting and sculpture.  In this lecture, I will argue that since the ’90s, artists have focused more on Conceptual Art’s legacy of remediation, rather than its capacity to de-materialize, making it possible to develop Conceptual practices pivoting on such media as painting (as in the work of R.H. Quaytman), sculpture (exemplified by Rachel Harrison), and performance (in the oeuvre of Andrea Fraser).

David Joselit is Distinguished Professor in the Art History PhD Program at the CUNY Graduate Center. He has taught at the University of California, Irvine, and Yale University where he was Department Chair from 2006-09.  Joselit is author of Infinite Regress: Marcel Duchamp 1910-1941 (MIT, 1998), American Art Since 1945 (Thames and Hudson, 2003), Feedback: Television Against Democracy (MIT, 2007), and After Art (Princeton University Press, 2012). He co-organized the exhibition, “Painting 2.0: Expression in the Information Age,” which opened at the Brandhorst Museum in Munich in 2015. He is an editor of the journal OCTOBER and writes regularly on contemporary art and culture.   His current book project is titled:  “Heritage and Debt: Art in Globalization.”

Respondent:
Caroline A. Jones, Professor in the History, Theory, and Criticism section, Department of Architecture, MIT.  She studies modern and contemporary art, focusing on its technological modes of production, distribution, and reception, and on its interface with science.

Department
Program in Art, Culture and Technology
Add to my calendar