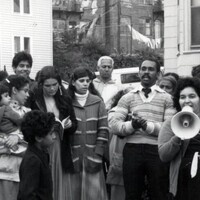 Please join us Monday 10/22 for the next installment of the Urban
Planning Film Series, with special guest Karilyn Crockett.

Once a predominantly Irish neighborhood of houses, churches, and small
stores, after World War II Boston's Mission Hill began to change:
thousands of units of public housing were built---and allowed to decay
there; nearby hospitals expanded, displacing people from their homes;
developers and speculators bought and sold property and built
twenty-story apartment buildings. A new, poor population and an
affluent professional population arrived to compete for parts of the
old neighborhood.  Through the voices of the people of Mission Hill,
the film tells the story of urban renewal, racial conflict, and the
struggle of a neighborhood to survive through changing times. Special
award winner, Boston Society of Film Critics, 1984.