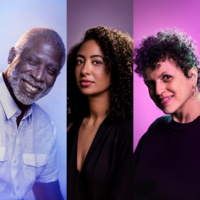 Social Justice in a Virtual World

The makers of the immersive media experience THE CHANGING SAME will discuss the challenges and opportunities their team faced in the development, production and distribution of their provocative story in their quest to use virtual reality and storytelling as a tool for healing and social change. Described by critics as deeply profound and powerful, THE CHANGING SAME recently premiered in the 2021 Sundance Film Festival’s New Frontier program.

Producer and director Joe Brewster is a Harvard-trained psychiatrist who uses his psychological training as the foundation in approaching the social issues he tackles as an artist and filmmaker. Brewster has created stories using installation, narrative, documentary, and print mediums that have garnered support from critics and audiences internationally, including the Sundance-winning and three-time Emmy nominated documentary, American Promise. He is a 2016 Guggenheim Fellow.

Filmmaker, artist, and author Michèle Stephenson pulls from her Panamanian and Haitian roots to think radically about storytelling and disrupt the imaginary in non-fiction spaces. She tells compelling, deeply personal stories that are created by, for, and about communities of color that reimagine and provoke. Her feature documentary, American Promise, was nominated for three Emmys and won the Jury Prize at Sundance. She is a Guggenheim Fellow and a Creative Capital artist.

Our lecture series is made possible by generous support from the MacArthur Foundation, Ford Foundation, and MIT Transmedia Storytelling Initiative.