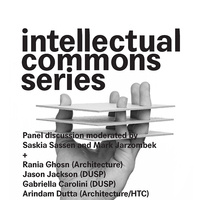 "Academia and Agency in the Era of Global Change"

This fall, SA+P Dean Hashim Sarkis and Architecture's Mark Jarzombek invite you to participate in a series of talks and workshops organized under the theme Intellectual Commons. On Tuesday, October 9, at 6 PM, join us in Long Lounge (7-429) for the next installment in the series, a workshop with SA+P’s Rania Ghosn, Jason Jackson, Gabriella Carolini, and Arindam Dutta, moderated by Saskia Sassen and Mark Jarzombek.

"Intellectual Commons
At a time when digital communications are growing, the need for direct interaction is all the more vital. At a time when MIT is building bridges across schools and disciplines, we can no longer operate primarily at the scale of micro-units. This reflects neither the interests of the new generation nor the nature of the problems that the world is leaving at our doorstep.

I invite you to come up with ideas that reflect the values that we hold in common. The vitality of the School—a community invested in shaping better commons for the world, from the environment to cities to public spaces and public art—is the extent in which we can exercise our collective imaginary."


Save the dates for other events in the series: