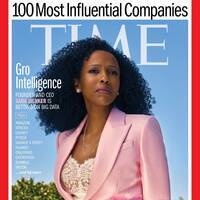 The tenth webinar in an eleven-part series focused on various aspects of sustainable development in Africa.

Sara Menker, an Entrepreneur and the CEO of Gro Intelligence.

Gro Intelligence was named by Time magazine as among the 100 most influential companies in 2021!!

She is a trustee of the Mandela Institute for Development Studies and was elected one of the World Economic Forum Young Global Leaders.

Menker was born and raised in Ethiopia. She studied Economics and African Studies at Mount Holyoke College. She moved to the London School of Economics for her graduate studies, and eventually earned an Master of Business Administration at Columbia University.

Menker is a former commodities group Vice President at Morgan Stanley. During her time at Morgan Stanley, Menker became interested in farmland investments. She left her job in Wall Street to use her skills in data analytics for social good. She became concerned by threat of a global food crisis, and started to investigate how Africa could mitigate the Earth's growing demands for food. In 2014 Menker established Gro Intelligence, a data-driven platform which connects food market around the world. Gro Intelligence includes information such as the cost of avocado exports from Mexico and popular coffee beans, and uses artificial intelligence to make predictions about trends in food prices. Gro Intelligence offer software that makes agricultural, weather and climate data easy to understand. The data is combined with satellite imagery and creates over 1,000 models a day. She has used Gro Intelligence to investigate the impact of natural disasters, including droughts, on food supply. The reports inform companies on what and where to sell products, as well as supporting policy makers and insurance companies.

In 2018 Menker was named the Henry C. Gardiner Global Food Systems Lecturer. She has presented at the Rockefeller Foundation, X and The New York Times.

Menker is a trustee of the International Center for Tropical Agriculture and the Mandela Institute for Development Studies. She was selected by the World Economic Forum as a Young Global Leader in 2014. She is also a member of The Aspen Institute African Leadership Initiative. Menker is involved with Cognition X, the artificial intelligence information platform.