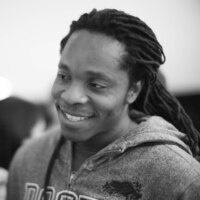 The first webinar in a seven-part series focused on various aspects of sustainable development in Africa.

Please register for this Zoom event at https://bit.ly/MITxTAU

David Moinina Sengeh studied biomedical engineering at Harvard University and graduated with a bachelor's degree in 2010. During his time at Harvard, he was cofounder of Lebone Solutions, a start-up that developed inexpensive batteries from microbial fuel cells. He joined MIT for his postgraduate studies, working under the supervision of Hugh Herr in the MIT Media Lab. He was inspired to work on prosthetics because he grew up surrounded by victims of civil war. He used MRI to map amputee's limbs, then assessed where artificial materials could create pressure points, and used 3D printing to generate new sockets. His prototypes were tested by veterans and amputees from the Boston Marathon bombing. He was named as a TED fellow in 2014, delivering a talk entitled The sore problem of prosthetic limbs. He also was selected as one of Forbes 30 Under 30 in 2014. He won the 2014 Lemelson–MIT Prize for his innovations in healthcare and was selected as one of Face2Face Africa's Young Africans Committed to Excellence. He completed his PhD at MIT in 2016.

The Center for International Studies (CIS) and the MISTI MIT-Africa Program has partnered with TRUE Africa University (TAU) to host its second annual webinar series focused on various aspects of sustainable development in Africa. Thursdays at noon EST, starting on March 3, TAU founder, MIT alumnus, and CIS research affiliate Claude Grunitzky, will interview the thinkers, shapers and doers who are impacting the future of Africa. Each webinar promises to be a genre-defining look into the opportunities and challenges facing the African continent and its people over the coming century.

Free & open to the public
Also watch it on YouTube.

Sign up for emails to get notified about upcoming events.
MIT is committed to providing an environment that is accessible to individuals with disabilities. If you need a disability related accommodation to attend or have other questions, please contact us at english7@mit.edu.