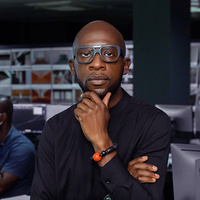 The sixth webinar in an eleven-part series focused on various aspects of sustainable development in Africa.

Kofi Bio is Associate Principal of Adjaye Associates' Accra studio overseeing all projects in Africa. Kofi has worked alongside David Adjaye for almost a decade. He began working in the London studio where he played an instrumental role in the completion of several significant projects including the Aishti Foundation, a mixed-use arts and retail building in Beirut and projects for Goldman Sachs and Tishman Speyer respectively.

In 2017, Kofi together with David led the opening of the Accra studio to drive the realisation of key projects such as the National Cathedral of Ghana, the Marine Drive masterplan development, and the Ghana Trade Fair redevelopment. Since its opening three years ago, Kofi has overseen the studio’s growth with an emphasis on sustainable development and cutting-edge technologies with vernacular design into the wider African market, securing major projects in South and East Africa.