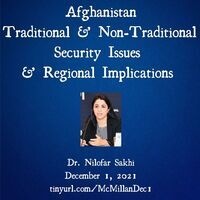 Afghanistan has entered a new phase since the collapse of the democratic system and the taker over by the Taliban regime. The republic is replaced by an Authoritative system which is highly totalitarian and includes Taliban hardcore and old guard filling top posts, most of them belong to one ethnic group, there are no available positions for other ethnic groups, women, and minorities. This has created severe limitations on civil society and has raised questions about the civil and political rights of individuals, particularly women, who are now deprived from participating in political positions, the development sector and education. The country faces a humanitarian, identity, and human rights crisis with issues, such as resource scarcity and irregular migration, causing social and political instability.

As the Taliban increases its stronghold and gains more territory and power throughout the country, it will become a serious transnational threat. Radicalization, the emergence of new terrorist groups, and arms trafficking will likely increase, adding to local security threats. Further fragmentation of society, along with multiple other factors — poverty, poor governance, Taliban atrocities, and its authoritarian system — will cause political instability and increase the probability of insurgency in a long-term.

Considering these factors, I will discuss the nature of traditional and nontraditional security threats with regard to their origins, conceptions and effects under the current conditions, and the long term impacts such threats will have on Afghanistan, its neighbors and other regional actors. I will also examine how these conditions threaten women and minorities who are struggling to live and exercise their independence and rights.

Dr. Nilofar Sakhi is a professorial lecturer of International Affairs at Elliott School of George Washington University. She is also a Nonresident senior fellow at the Atlantic Council. Sakhi is a scholar and policy practitioner who has written extensively on various aspects of transitional security and human security, peacemaking and peacebuilding processes. Her recent book is on Human Security and Agency: Reframing productive power in Afghanistan. Sakhi has been involved in assisting peace, counter insurgency and Gender policy formulation. Her thematic expertise is terrorism, security, and peace. Her regional expertise is on South Asia, Iran, and Afghanistan with focus on regional security architecture. Sakhi has been involved in developing strategies and programs for women in politics and economy in Afghanistan. She is the founder of first women civil society organization and the first radio station for women in the Western zone of Afghanistan.