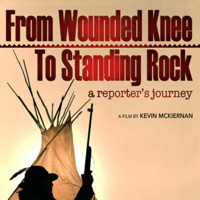 About the film: A rookie NPR reporter on his first assignment, covering the armed occupation of Wounded Knee in South Dakota in 1973, is treated as the enemy and ultimately arrested by the FBI for defying a government news blackout to embed with militant Indians. Forty years later, he meets a Yurok Indian fisherman in California, a man he unwittingly had photographed during the 10-week occupation. The two become friends, traveling back to the Dakotas and later to the pipeline protests at Standing Rock, to investigate the legacy of 1970's activism in Indian Country.  More Info

About the speaker: Kevin McKiernan is a veteran foreign correspondent, photographer and filmmaker. Nominated for the Pulitzer Prize, McKiernan has covered some of the world's most troubled regions, from El Salvador to Iraq, from West Africa to Afghanistan and Syria. His feature documentary, "From Wounded Knee to Standing Rock: A Reporter's Journey", premiered in October 2019 at the Mill Valley Film Festival (mvff), before continuing on the festival circuit.