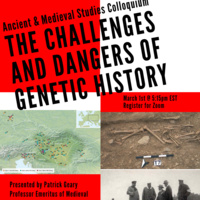 Presented by Patrick Geary, Professor of Medieval History Emeritus in the Institute for Advanced Study

As co-PI of a large European Science Foundation Synergy grant to study population dynamics in the Carpathian basin between the fifth and ninth centuries, I am at the start of an exciting experiment in using genomic data for historical analysis. However many historians and archaeologists, reflecting on the disastrous attempts to combine biological, archaeological, and cultural data in the first half of the twentieth century, fear that the new field of “genomic history” may be repeating the essentializing and ultimately racist errors of the past. In this lecture, I will present both the very real problems associated with the work of scholars such as Gustav Kossinna, the risks that some recent genetics studies run of replicating them, and attempt to present how our project seeks to avoid them as we combine genomic, archaeological, isotopic, and historical data.