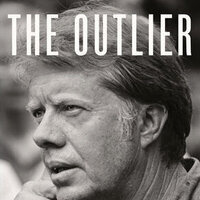 Starr Forum: The Outlier: The Unfinished Presidency of Jimmy Carter

Please register for this Zoom event at https://bit.ly/TheOutlier

Jimmy Carter’s one-term presidency is often labeled a failure; indeed, many Americans view Carter as the only ex-president to have used the White House as a stepping-stone to greater achievements. But in retrospect the Carter political odyssey is a rich and human story, marked by both formidable accomplishments and painful political adversity. In this deeply researched, brilliantly written account, Kai Bird expertly unfolds the Carter saga as a tragic tipping point in American history. Drawing on interviews with Carter and members of his administration and recently declassified documents on Israel, the Iranian revolution and the 1980 October Surprise, Bird delivers a profound, clear-eyed evaluation of a leader whose legacy has been deeply misunderstood.

Kai Bird is a Pulitzer Prize winning historian who has published biographies of John J. McCloy, McGeorge Bundy, J. Robert Oppenheimer, Robert Ames—and now The Outlier: The Unfinished Presidency of Jimmy Carter. He has also authored a memoir about his childhood in the Middle East. He is the director of the Leon Levy Center for Biography at the Graduate Center of the City University of New York.

John Tirman is the executive director of and a principal research scientist at MIT's Center for International Studies. Tirman is also a non-resident fellow at Democracy for the Arab World Now (DAWN). He is author most recently of Dream Chasers: Immigration and the American Backlash and has authored numerous books including (as a co-author) Becoming Enemies: US-Iran Relations and the Iran-Iraq War, 1979-1988. His main research interests currently focus on human security.

Free & open to the public
Also watch it on YouTube.
For more information or accessibility accommodations please contact starrforum@mit.edu.

A full listing of Starr Forums is available here.