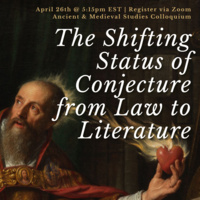 Ancient & Medieval Studies Colloquium: The Shifting Status of Conjecture from Law to Literature

Abstract: Traditionally ascribed to Hermagoras (2nd C BCE) for use in the law courts and later developed by, among others, Cicero and Quintilian as the infrastructure of argumentation, the so-called status system, with its three foundational questions—conjectural (“did it happen?” [sitne]), definitional (“what happened?” [quid sit]), and qualitative (“what kind of action was it?” [quale sit])—leaves a deep and pervasive impact on the analysis of human agency from antiquity to the early modern period. Focusing on the first of the three status, the conjectural, and more precisely on its two main topics, will and power (voluntas and potestas), this talk will chart their itinerary both in theory and practice from legal through theological to literary discourse, with special attention to Augustine and Petrarch.