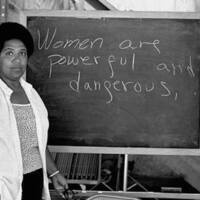 The polemic as argument has a particular form. It does not mince words; it hones them, sharpens them, collapsing the target of its critique. The polemic is a lobbed bomb; a sharp text interested not in responses but rather in consequences, craters. While definitions of “polemic” may read as brash, bold, and unambiguous, the pre-Socratic Heraclitus was no less direct in his characterization of war [polemos] as the great arbiter and “father of all and king of all,” which makes of humans “gods. . .[or] men,” “slaves. . .[or] free.” [1] Heraclitus’s polemos is destructive, but nonetheless it inscribes hierarchies, classes, victors, and losers.

In dragging the polemic back into play as an object of interest and analysis, this conference reviews territory that has been off-limits and irradiated for some time now, and perhaps for good reason. The polemic, for some, is an academic swear word—the stuff of nastiness, gym-class antagonism, and ad hominem attacks. Michel Foucault once offered some choice words on the matter: “[The polemicist] possesses rights authorizing him to wage war. . .; the person he confronts is not a partner in the search for truth, but an adversary. . .whose very existence constitutes a threat.” [2] A “parasitic figure on discussion,”the polemic is a scholarly taboo. [3]

And yet, the polemic beckons us today, perhaps because civil discourse and delicacy no longer seem palatable in the current political climate as protests assemble and marches spill into streets. However, nuance remains crucial. To look back at history’s cycles of turmoil is to see that the arguments of the academe and the proclamations of the polemicist function dialectically. We ask today: what do the academic thesis and the pithy protest slogan have to say to one another?