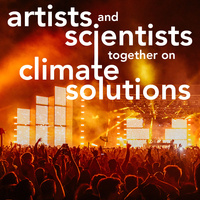 Artists and Scientists Together on Climate Solutions

This hybrid in-person and virtual event brings together key voices from the music industry with scientists and engineers engaged in climate solutions. We will explore diverse perspectives from music industry leaders on our climate present and future, and discuss ways in which the global music industry is emerging as an important force for a climate positive future. Joining representatives from the music industry will be scientists and engineers who have been engaged in the very real and urgent need for greater mass participation and commitment to reducing greenhouse gas emissions and preparing for a climate changed world.

This is the inaugural event of a collaboration between the MIT Environmental Solutions Initiative's (ESI) Climate Machine, a project dedicated to productive connections between climate and the arts, and the Involved Group (Anjunabeats + Anjunadeep), and industry-leading label in trance, house and electronic music. It is presented as part of ESI's People, Prosperity and the Planet seminar series.

Tony McGuinness is one third of GRAMMY-nominated electronic group Above & Beyond. Based in London and formed in the year 2000 with bandmates Jono Grant and Paavo Siljamäki, Above & Beyond have played for millions of dance music fans in hundreds of cities around the world, including sold out performances at iconic venues like Madison Square Garden, The Hollywood Bowl and Royal Albert Hall. Founders of the influential Anjunabeats and Anjunadeep record labels, Tony, Jono and Paavo also host a radio show, Group Therapy Radio, that's broadcast to millions of dance fans every Friday.

Dr. Dava Newman is the director of the MIT Media Lab, Apollo Program Professor of Astronautics at MIT and a Harvard–MIT Health, Sciences, and Technology faculty member. She has served as NASA Deputy Administrator from 2015–2017; her research in multidisciplinary aerospace biomedical engineering investigates human performance across the spectrum of gravity. She is also the inventor of BioSuit™, which has been exhibited in the Venice Biennial, American Museum of Natural History, Victoria and Albert and Museum and Metropolitan Museum of Art, and designer of Earth Speaks™, an open source platform of curated space data that applies AI, natural language and supercomputer visualizations to help accelerate actions to regenerate Earth’s oceans, land and climate.

Anna Johnson is Sustainability and Environment Officer at Involved Group, the parent company of Anjunabeats, Anjunadeep, Involved Publishing and Involved Management. Anna leads on embedding sustainability across business operations including policy development, strategy, and increasing engagement with sustainability across the business ecosystem. She coordinates Involved Group's partnership with MIT, facilitating messaging and educational opportunities and offering opportunities for people to engage in real climate action. Johnson has overseen sustainability initiatives for major art and culture festivals, and represented Business Fights Poverty, a business-led collaboration network, at the UN General Assembly in 2018.

John E. Fernández ‘85 (moderator) is a professor of building technology in the Department of Architecture and a practicing architect. Fernández founded and directs the MIT Urban Metabolism Group, a highly multidisciplinary research group focused on the resource intensity of cities and design and technology pathways for future urbanization, and serves as faculty director of the MIT Environmental Solutions Initiative.