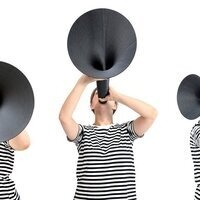 Ashley Fure | Where the Worldviews Are

Where the Worldviews Are

Ashley Fure’s sound art practice stems from a fundamental belief that the sonic is social and the aesthetic is political. Blurring false binaries between formalism and conceptualism, abstraction and identity, onto-aesthetics and social mediation, her work pursues a micropolitical materialism that manifests on multiple scales: from the casting of bodies, to the movement of audiences, to the internal structure of anarchic noise. This talk will track her interest in ritual acoustics, post-human kink, and the politics of abstraction through a range of projects and media. Linking practice and pedagogy, broader questions will be posed about disciplinary inheritance, educational ethics, and the problematic canons of the West. In times such as these, on an earth such as this, with these very resources in our hands, what do we do with our forebears – their babies and their bathwater?

Ashley Fure (b.1982) is an American composer and sound artist. Called “raw, elemental,” and “richly satisfying” by The New York Times, her concert music and performance installations explore ritual acoustics, posthuman kink, and the micropolitics of noise. A finalist for the 2016 Pulitzer Prize in Music, Fure also won a Lincoln Center Emerging Artists Award, a Guggenheim Fellowship, a Rome Prize in Music Composition, a DAAD Artists-in-Berlin Prize, a Foundation for Contemporary Arts Grant for Artists, a Fulbright Fellowship to France, and a Mellon Postdoctoral Fellowship from Columbia University. Her work has been commissioned by major ensembles throughout Europe and the United States including The New York Philharmonic, The Los Angeles Philharmonic, Klangforum Wien, Ensemble Modern, Diotima Quartet, and the International Contemporary Ensemble. Notable recent projects include Filament: for Trio, Orchestra, and Moving Voices (2018), called “captivating” and “ravishing” by The New York Times, The Force of Things: An Opera for Objects (2017), an immersive installation opera called “staggeringly original” and “the most purely visceral music-theatre outing of the year” in The New Yorker; and Bound to the Bow: for Orchestra and Electronics, called “boldly individual” by the New York Times and “the most arresting of the world premieres” at the 2016 New York Phil Biennial in The New Yorker. Fure is an Associate Professor of Music (Sonic Arts) at Dartmouth College.