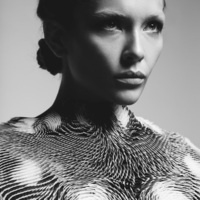 What if our environment could detect our physical movement and emotional states, and respond accordingly? This presentation addresses interactive material interfaces that respond to the behavior of the human body and its emotions through the implementation of emerging technologies. It is illustrated by a series of projects that cover a range of different scales from an intimate scale and the world of fashion and wearable computing, through to an architectural scale and the world of interactive architecture. The presentation explores the use of digital technologies to develop responsive materials whose morphological behavior is inspired by natural systems. The aim is to develop novel interactive systems to foster an empathetic relationship between human beings and their environment.

Behnaz Farahi is a designer and creative technologist based in Los Angeles working at the intersection of fashion, architecture and interaction design. Trained as an architect and specializing in 3D printing and physical computing, her ultimate goal is to enhance the relationship between human beings and their environment by following morphological and behavioral principles inspired by natural systems. Behnaz is a recipient of a number of prestigious awards including the 2016 World Technology Design Award and the 2016 Innovation By Design Fast Company Design Award. Her work has been featured on various television channels, including the BBC and CNN, and in leading journals and newspapers, such as Wired and The Guardian. She is currently an Annenberg Fellow and is completing her PhD in Interdisciplinary Media Arts and Practice at the USC School of Cinematic Arts.