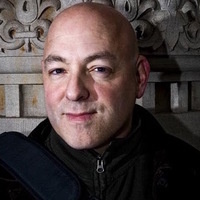 MIT Comparative Media Studies/Writing is thrilled to welcome award-winning comics creator Brian Michael Bendis, a New York Times bestseller and one of the most successful writers working in mainstream comics, for the 2018 Julius Schwartz lecture.

For the last eighteen years, Brian’s books have consistently sat on the top of the nationwide comic and graphic novel sales charts. Now with DC Comics, he is the co-creator and consulting producer of the Peabody Award-winning Jessica Jones on Netflix from Marvel TV. For Marvel entertainment, Bendis was the monthly writer of the bestselling Defenders, Jessica Jones, Iron Man, Spider-Man, and Guardians of the Galaxy series.

The introduction of the multiracial Spider-Man, Miles Morales, made the front page of USA Today and went on to become an international hotbed political topic featured on Fox News, CNN, The Daily Show, Conan O’Brien, Howard Stern and many others.

The news of a new ‘Iron man’ character in the form of 15-year-old Riri Williams made massive international headlines when the story broke in Time magazine. Her solo debut as Invincible Iron man debuted in the top five nationwide.

Before that, Brian completed a 100 issue run on the X-Men franchise with the debut of ALL NEW X-MEN and UNCANNY X-MEN and 9 years helming Marvel’s popular AVENGERS franchise by writing every issue of the NEW AVENGERS plus debuting the hit books AVENGERS, MIGHTY AVENGERS and DARK AVENGERS along with the wildly successful ‘event’ projects AVENGERS VERSUS X-MEN, HOUSE OF M, SECRET WAR, SPIDER-MEN, SECRET INVASION, AGE OF ULTRON, SIEGE and CIVIL WAR 2.

The Julius Schwartz Lecture, produced with generous support by the Gaiman Foundation, is hosted by the Comparative Media Studies/Writing program at MIT and was founded to honor the memory of longtime DC Comics editor Julius “Julie” Schwartz, whose contributions to our culture include co-founding the first science fiction fanzine in 1932, the first science fiction literary agency in 1934, and the first World Science Fiction Convention in 1939. Schwartz went on to launch a career in comics that would last for 42 years, during which time he helped launch the Silver Age of Comics, introduced the idea of parallel universes, and had a hand in the reinvention of such characters as Batman, Superman, the Flash, Green Lantern, Hawkman, and the Atom.

The Schwartz Lecture is