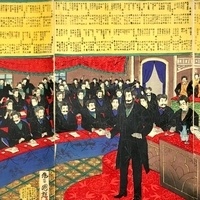 Bureaucrats and Politicians in Japan: Conflict and Collaboration from 1868 to 2018

Japan’s administrative state has maintained an outsized presence in the nation’s politics throughout its modern history but how has the relationship between its bureaucrats and the elected politicians evolved? Yuichiro Shimizu will take us on a historical journey from the origins of modern Japanese bureaucracy in the late nineteenth century to the present-day debates on the imposition of “political leadership” (seiji shudō) over the bureaucrats.

About the Presenter: Yuichiro Shimizu is a Professor of Japanese Politics and History in the Faculty of Policy Management, Keio University, Japan. His recent book, The Origins of the Modern Japanese Bureaucracy  (forthcoming in English) describes the process of nation-building in Meiji and Taisho-era Japan from the viewpoint of how a national elite was created and expanded. He is also the author of Party and the Bureaucracy in Modern Japan: the Clash of the Constitutional Government(in Japanese).