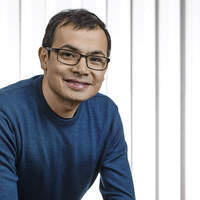 The Spring 2022 Brains, Minds, and Machines (BMM) Seminar Series will be hosted in a hybrid format. Please see the information included below regarding attending the event either in-person or watch via live stream.

Abstract: The past decade has seen incredible advances in the field of Artificial Intelligence (AI). DeepMind has been in the vanguard of many of these big breakthroughs, pioneering the development of self-learning systems like AlphaGo, the first program to beat the world champion at the complex game of Go. Games have proven to be a great training ground for developing and testing AI algorithms, but the aim at DeepMind has always been to build general learning systems ultimately capable of solving important problems in the real world. I believe we are on the cusp of an exciting new era in science with AI poised to be a powerful tool for accelerating scientific discovery itself. We recently demonstrated this potential with our AlphaFold system, a solution to the 50-year grand challenge of protein structure prediction, culminating in the release of the most accurate and complete picture of the human proteome.

Speaker Biography:  Demis Hassabis is the Founder and CEO of DeepMind, the world’s leading AI research company that aims to solve intelligence to advance science and benefit humanity.

Founded in London in 2010, DeepMind has achieved breakthrough results in many challenging AI domains from Atari games to StarCraft II, and has published over 1000 research papers - including more than two dozen in Nature and Science.

In 2016, DeepMind developed AlphaGo, the first program to beat a world champion at the complex game of Go. In 2020, its AlphaFold program was heralded as a solution to the 50-year grand challenge of protein structure prediction and in 2021, DeepMind launched the AlphaFold Protein Structure Database, which offers the most complete and accurate picture of the human proteome to date.

A chess prodigy, Demis reached master standard aged 13, and went on to program the multi-million selling simulation game Theme Park aged 17. After graduating from Cambridge University in computer science, he founded pioneering videogames company Elixir Studios, and completed a PhD in cognitive neuroscience at University College London. Science listed his neuroscience research on imagination as one of 2007’s top ten breakthroughs, and in 2021, AlphaFold2 was selected as the Breakthrough of the Year.

He is a Fellow of the Royal Society and the Royal Academy of Engineering. In 2017 he featured in the Time 100 list of most influential people, and in 2018 he was awarded a CBE for services to science and technology.

Watch the live stream of the talk on our Youtube Channel

All visitors to the MIT campus are required to follow MIT COVID19 protocols.  Specifically, visitors are required to use the new MIT TIM Ticket system for accessing MIT buildings. Per MIT’s event policy, use of the Tim Tickets system is required for all indoor events; for information about this and other current MIT policies, visit MIT Now.

Please obtain your Tim Ticket no earlier than 24 hours in advance of the event and no later than 30 minutes prior to the event.