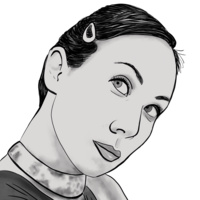 She will be sharing Snatch-ural History of Copper (working title), an art project, book, and feature-length film initiated by artist Marisa Morán Jahn that investigates copper, an element found in electrical wires, computers, lightning rods, and the IUD (intrauterine device) implanted in Jahn’s own ‘snatch’ (womb). Jahn interviews a range of experts in search of otherworldly answers that trammel the boundaries of myth, literary studies, science, alchemy and political controversy. Interviewing scientists in Saint Petersburg Florida who use rockets outfitted with a copper nose to trigger (and capture) lightning, Jahn asks, “Do you think that when the lightning goes off I’ll feel it in my cooch?” She visits a shrine on the island of Cyprus, home of the earliest copper mines dating to 8700 BCE as well as the pre-Christian god, Venus of Aphrodite who share the same symbol (♀) most familiar to us today as the symbol for women, females, and a movement for women’s liberation. Throughout these real-world investigations, Jahn seeks access to the top of a building and solder her copper IUD on top of a copper lightning rod, raising its height by an imperceptible inch. “I can’t wait for the moment when a bolt of lightning hits this thing — just imagine my little IUD radiating. It might even be sizzled into a thousand little parts distributed and distended into the atmosphere.” Poetically and playfully weaving the issues into a new cosmology, the film touches upon timely issues such as planetary sustainability, labor, and reproductive self-determination during a moment when both sides of the spectrum mount all-offensive campaigns.

Sasha Costanza-Chock (pronouns: they/them or she/her) is a scholar, activist, and media-maker, and currently Associate Professor of Civic Media at MIT. They are a Faculty Associate at the Berkman-Klein Center for Internet & Society at Harvard University, Faculty Affiliate with the MIT Open Documentary Lab and the MIT Center for Civic Media, and creator of the MIT Codesign Studio (codesign.mit.edu). Their work focuses on social movements, transformative media organizing, and design justice. Sasha’s first book, Out of the Shadows, Into the Streets: Transmedia Organizing and the Immigrant Rights Movement was published by the MIT Press in 2014. They are a board member of Allied Media Projects (AMP); AMP convenes the annual Allied Media Conference and cultivates media strategies for a more just, creative and collaborative world (alliedmedia.org).

Jane M. Saks is a creative collaborator, arts producer, writer, and educator who has worked to challenge and champion issues of gender, sexuality, human rights, race and power within the worlds of arts and culture, politics and civil rights, academia and philanthropy. She is Founding President and Artistic Director of Project& (projectand.org), an organization that creates new models of cultural participation and experience with social impact. Previously, she was the founding Executive Director at the Institute for the Study of Women and Gender in the Arts and Media where she created the award-winning Fellowship program, developing and launching works that went on to win Pulitzer Prizes, MacArthur Genius Awards, Obie Awards and Guggenheims. She is an invited lecturer at civic, cultural and educational institutions internationally, a visiting critic at Yale University, Regional Judge for the White House Fellows, and will be a visiting Professor at Harvard University. A published poet, Saks has been the Creator, Author, Producer, Co-Producer, Creative Advisor and Series Producer on many original creative works in various media and art forms.

Steve Seidel holds the Patricia Bauman and John Landrum Bryant Chair in Arts in Education at the Harvard Graduate School of Education. He is Faculty Director of the Arts in Education program and a former director of Project Zero (2000-2008). His current research includes Talking with Artists who Teach, a study of working artists’ ideas and insights into the nature of artistic development and learning. Before becoming a researcher, Seidel taught high-school theater and language arts in the Boston area for 17 years. He has also worked as a professional actor and stage director.

Co-hosted with the MIT Program in Art, Culture, and Technology.