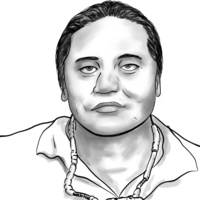 “Protecting the Water in Solidarity and Unity”

Myron Dewey is an indigenous journalist, educator, documentary filmmaker and the developer of Digital Smoke Signals, a social networking and filmmaking initiative, emerging out of the Standing Rock Sioux Reservation protests against the Dakota Access Pipeline project of 2016-17. Using a full range of contemporary media, including drone technologies, Dewey has pioneered the blending of citizen monitoring, documentary filmmaking, and social networking in the cause of environment, social justice and indigenous people’s rights; he co-directed the 2017 award-winning documentary, Awake: A Dream from Standing Rock.

Co-hosted with the MIT Program in Art, Culture, and Technology and the Global Media Technologies and Cultures Lab.

Recent MacArthur Fellow (2018) Lisa Parks is a media scholar whose research focuses on satellite technologies and media cultures; critical studies of media infrastructures; and media, militarization and surveillance. Parks has held visiting appointments at the Institute for Advanced Study (Wissenschaftskolleg) in Berlin, McGill University, University of Southern California, and the Annenberg School of Communication at the University of Pennsylvania. She is committed to exploring how greater understanding of media systems can inform and assist citizens, scholars and policymakers in the US and abroad to advance campaigns for technological literacy, creative expression, social justice, and human rights.

Nicholas A. Brown is a scholar and artist based in Boston, MA and La Farge, WI. He teaches in the School of Architecture and Department of History at Northeastern University. His work examines the production of cultural landscapes and the politics of connectivity in settler colonial contexts. Recent and ongoing projects include: Kickapoo Conversations, A People’s Guide to Firsting and Lasting in Boston, Re-Collecting Black Hawk: Landscape, Memory, and Power in the American Midwest, The Vanishing Indian Repeat Photography Project, and Ni-aazhawa’am-minis Spur.

An artist, filmmaker, and creative technologist of Ecuadorian and Chinese descent, Marisa Morán Jahn’s artworks redistribute power, “exemplifying the possibilities of art as social practice” (ArtForum). Her work has been presented in a range of venues including Obama’s White House, Museum of Modern Art, ITVS/PBS, and worker centers. An awardee of Creative Capital, Sundance, and Tribeca Institute, Jahn is the founder of Studio REV, an art and social justice non-profit organization, an Assistant Professor at The New School, and a Visiting Artist at MIT Art, Culture, Technology.