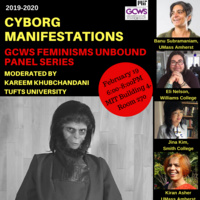 This panel invites scholars to consider the confluences between science and technology studies and gender and sexuality studies in their own research. Feminist, queer, and trans studies scholars attending to science, technology, environment, and disability are dismantling the rubrics of gender and body at the core of our fields in order to think more critically about the material conditions of living inside racial capitalism. For example: Donna Haraway’s cyborg troubles the distinctions between body and technology; Sylvia Wynter asks who can access categories of “man” and “human” under ongoing conditions of captivity; Kim Tallbear discusses indigenous epistemologies that trouble hegemonic distinctions between what is and is not alive; and Jasbir Puar implicates technological warfare in imperialist projects that disable nations and bodies. Science and technology studies not only turns us toward materiality, but also offers analytics to think through social and aesthetic phenomena: virtual, viral, cellular, toxic, and nuclear. Thinking at the interstices of machine and myth, flesh and data, and human, animal, plant, land, and spirit exposes more ways that bodies are governed, and imagines more possibilities for minoritarian subjects to steal away from surveillance. How are science and technology working to liberate and delimit gender and sexuality? How do empiricism and imagination work together? How do we facilitate interdisciplinary scholarship across the silos of the neoliberal campus?

Eli Nelson (Mohawk) is an Assistant Professor in American Studies at Williams College and Director of Fellowships at the Center for Black, Brown, and Queer Studies. He got his PhD in History of Science at Harvard University in 2018. He works on the history of Native science, critical Indigenous theory, Indigenous science fiction and futurism, and gender and sexuality.

Jina B. Kim is Assistant Professor of English and the Study of Women and Gender at Smith College. Her research and teaching interests emerge from the intersection of critical disability studies, feminist-of-color/ queer-of-color critique, and contemporary ethnic U.S. literature, and her manuscript-in-progress examines the discourse of public dependency in the literary-cultural afterlife of 1996 US welfare reform. Her work has appeared or is forthcoming in Signs: Journal of Women and Culture in Society, Disability Studies Quarterly, Lateral: Journal of the Cultural Studies Association, Disability Studies and the Environmental Humanities (University of Nebraska Press), and Asian American Literature in Transition (Cambridge University Press).

Mel Chen, Associate Professor of Gender & Women’s Studies and Director for the Center for the Study of Sexual Culture, University of California, Berkeley

Mel Y. Chen is Associate Professor of Gender & Women's Studies and Director for the Center for the Study of Sexual Culture at U.C. Berkeley. In Spring 2020, they are in residence as F.O. Mathiessen Visiting Professor of Gender and Sexuality at Harvard University, and in 2018-19 served as Robert Sterling Clark Visiting Professor at Williams College. Since their 2012 book, Animacies: Biopolitics, Racial Mattering, and Queer Affect, Chen has been working toward completing a book project concerning intoxication’s role in the interanimation of race and disability in histories and legacies of the transnational 19th century as well as in current schemes of securitization. Elsewhere, Chen has published writing on slowness, agitation, gesture, inhumanisms, and cognitive disability and method. Chen co-edits the “Anima” book series at Duke, and is part of a small and sustaining queer-trans of color arts collective in the San Francisco Bay Area.

Moderator: Kareem Khubchandani, is the Mellon Bridge Assistant Professor in theDepartment of Theatre, Dance, and Performance Studies and the Program in Women's, Gender, and Sexuality Studies at Tufts University. He is currently working on a book project titled Ishtyle: Accenting Gay Indian Nightlife (U. Michigan Press), a performance ethnography of queer social spaces in Bangalore and Chicago. He has published in Scholar and Feminist Online; Transgender Studies Quarterly; Journal of Asian American Studies; The Velvet Light Trap; Theater Topics; Theatre Journal; The Wiley Blackwell Encyclopedia of Gender and Sexuality Studies; Queer Dance (Oxford UP); and Queering Digital India(Edinburgh UP).