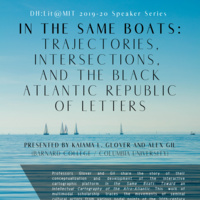 DH:Lit@MIT Speaker Series 2019-20: In the Same Boats: Trajectories, Intersections, and the Black Atlantic Republic of Letters

Professors Glover and Gil share the story of their conceptualization and development of the interactive cartographic platform In the Same Boats: Toward an Intellectual Cartography of the Afro-Atlantic. This work of multimodal scholarship traces the movements of seminal cultural actors from various nodal points of the 20th-century African diaspora. Designed to encourage the collaborative production of humanistic knowledge within a black Atlantic research community, Same Boats pushes back against the ways in which “Global South” intellectual production has been stubbornly balkanized in the academy. Glover and Gil discuss the process of building this project, laying out its intellectual and ethical intentions, as well as its dreamed-of futures.