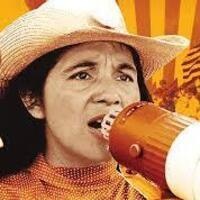 Film "Dolores" followed by a Q&A with Roxana Rivera from SEIU.

Dolores Huerta is among the most important, yet least known, activists in American history. An equal partner in co-founding the first farm workers unions with Cesar Chavez, her enormous contributions have gone largely unrecognized. Dolores tirelessly led the fight for racial and labor justice alongside Chavez, becoming one of the most defiant feminists of the twentieth century—and she continues the fight to this day, at 87. With intimate and unprecedented access to this intensely private mother to eleven, the film reveals the raw, personal stakes involved in committing one’s life to social change. Directed by Peter Bratt.

The daughter of Salvadoran immigrants who fled the Central American country in the 70s, Roxana Rivera has been organizing low-wage workers for over twenty years, fighting for workers’ rights and justice for immigrants. She has been part of and led hunger strikes in California and New England, including those part of the historic Justice for Janitors struggle in the 1990s.

After nearly a decade with SEIU Local 615 driving member engagement work and leading its commercial division, Rivera was appointed by 32BJ President Héctor Figueroa to head up 32BJ SEIU District 615 after a merger of the two locals and then was elected by the district’s membership. 32BJ SEIU represents 18,000 janitors, security officers, and workers in higher education across New Hampshire, Massachusetts and Rhode Island, and over 155,000 members in eleven states and Washington DC.

Department
Women's and Gender Studies
Add to my calendar