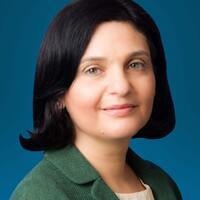 Emile Bustani Seminar: "Goodbye to All? Lebanon Turns One Hundred"

"Goodbye to All? Lebanon Turns One Hundred"

Lebanon, which celebrates its centennial in September, is facing a perfect storm. The country has witnessed widespread protests since October 2019 and is in the midst of a catastrophic economic collapse. Today, four out of five key pillars that have long sustained the country are either crumbling or facing serious challenges. Its power sharing arrangement is in doubt, its myth as a merchant republic is at an end, its resourceful middle class is crumbling, fundamental freedoms of speech and assembly are being undermined and its security forces, namely the army is under increasing pressure. And yet, in response to this dire situation, national-level decision making has been slow, with politicians displaying callous disregard for the country. Against this background, what options are there for Lebanon and how will it fare over the coming centennial?

She has two PhDs in the social sciences and humanities from Massachusetts Institute of Technology (MIT) and the Architectural Association (AA) in London. She has consulted with international organizations including the United Nations organizations and the World Bank as well the private sector on a broad range of issues in among other countries Lebanon, Pakistan, Oman, Egypt, Jordan, Saudi Arabia, and Iran. She serves on a number of advisory boards including the UNESCO international commission on the Futures of Education; a global member of the Trilateral Commission; co-chair of the International Advisory Board for the Asfari Institute for Civil Society and Citizenship at the American University of Beirut; and member of the Board of Directors of the Ana Aqra Association.

Yahya  is the author of numerous publications, including most recently Unheard Voices: What Syrian refugees need to return home (April 2018); editor of Contentious Politics in the Syrian Conflict: Opposition, Representation, and Resistance, co-editor of Visualizing Secularism and Religion, Egypt, Lebanon, Turkey, India and was the director and principal author of The National Human Development Report 2008–2009: Toward a Citizen’s State in Lebanon.