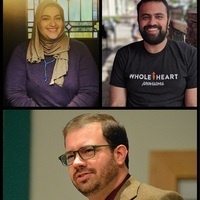 Join us for dinner and conversation as we embark on a series exploring multiple aspects of identity in a variety of religious and spiritual traditions. Hear from faith leaders about their journey through the intersections of sexual orientation, gender identity, and their religious, spiritual, or ethical tradition. All are welcome.

Magda Mohamed is a PhD candidate in the Department of Religion at Boston University, where she focuses on gender, sexuality, and embodied theologies in American Islam. She earned her M.Div. at Harvard Divinity School in 2015, and currently serves as the Muslim chaplain at Groton School. Earlier this year she co-founded the Union Square Halaqa, a woman-centered and queer-affirming Muslim prayer gathering.

Nabil Khan is a co-founder of Queer Muslims of Boston (est. 2013), and also a cofounder of the Union Square HalaQa group. He served as president of the MSA at his alma mater. He is a researcher at Harvard T.H. Chan School of Public Health.

Co-hosted by LBGTQ@MIT and the Office of Religious, Spiritual, and Ethical Life.