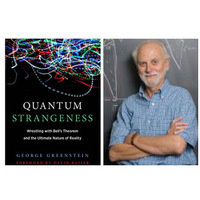 Please join us in welcoming astrophysicist George Greenstein to MIT Press Bookstore, to discuss his upcoming book, Quantum Strangeness: Wrestling with Bell's Theorem and the Ultimate Nature of Reality.

Quantum mechanics is one of the glories of our age. It has immeasurably altered our conception of the natural world. Its philosophical implications are earthshaking. But quantum mechanics steadfastly refuses to speak of many things; it deals in probabilities rather than giving explicit descriptions. It never explains. Astrophysicist George Greenstein has been both fascinated and confused by quantum mechanics for his entire career. In this book, he describes, engagingly and accessibly, his efforts to understand the enigma that is quantum mechanics.

George Greenstein is Sidney Dillon Emeritus Professor of Astronomy at Amherst College. He is the author of Frozen Star: Of Pulsars, Black Holes, and the Nature of Stars, The Symbiotic Universe: Life and Mind in the Cosmos, The Quantum Challenge: Modern Research on the Foundations of Quantum Mechanics (with Arthur Zajonc), and other books.