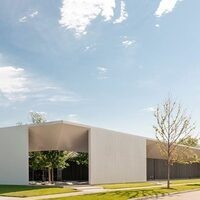 Guy Nordenson is a structural engineer and professor at Princeton University. He practiced structural engineering in San Francisco and New York and in 1987 established Arup’s New York office. In 1997 he began his independent practice. Nordenson was the structural engineer for the 2004 MoMA expansion in New York, the Jubilee Church in Rome, the Nelson-Atkins Museum of Art in Kansas City and over 200 other projects. Recent and current projects include the expansion of the Kimbell Art Museum in Fort Worth, the National Museum of African American History and Culture in Washington DC and the Menil Drawing Institute in Houston TX.

In 2009 Nordenson was the 7th structural engineer awarded the AIA’s Institute Honors for Collaborative Achievement Award, and the first practicing structural engineer to be elected to the American Academy of Arts and Sciences. He was Commissioner and Secretary of the NYC Public Design Commission from 2006 to 2015 and is a member of the NYC Panel on Climate Change, both mayoral appointments. In 2013 his research team at Princeton was awarded a major grant by the Rockefeller Foundation to develop “Structures of Coastal Resilience” in collaboration with the US Army Corps of Engineers. The results of this (www.structuresofcoastalresilience.org) were incorporated in the 2015 North Atlantic Comprehensive Study of the USACE. In 2016 he published Reading Structures: 39 Projects and Built Works with Lars Müller Publishers, a companion to his 2010 collection of essays Patterns and Structure.

Image: Courtesy of The Menil Collection / Photo by Paul Hester