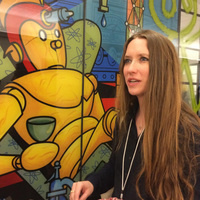 In this talk, Hillary Chute considers the contemporary relevance of Art Spiegelman’s classic graphic novel, Maus: A Survivor’s Tale, in an overview linked to her forthcoming book Maus Now: Selected Writing (a collection to be published by Pantheon in 2022). Maus was first published serially beginning in 1980, and came out in two book volumes in 1986 and 1991; today, she argues, it’s timeless for many different reasons, including stark political ones. She highlights what Spiegelman’s comics narrative, which is about history, reveals about the form’s capacity both to register the continuousness of history and also to function in today’s context as a text of resistance to fascism.

Hillary Chute is Distinguished Professor of English and Art + Design at Northeastern University. She is the author or editor of six books, including Why Comics? From Underground to Everywhere (Harper, 2017), Disaster Drawn: Visual Witness, Comics, and Documentary Form (Harvard UP, 2016), Outside the Box: Interviews with Contemporary Cartoonists (U of Chicago P), and Graphic Women: Life Narrative and Contemporary Comics (Columbia UP, 2010). She has written for venues including Artforum, Bookforum, the Village Voice, and the New York Review of Books. She is a comics and graphic novels columnist for the New York Times Book Review.