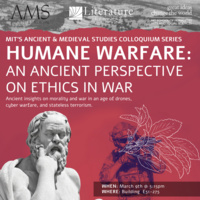 Humane Warfare: An Ancient Perspective on Ethics in War

What are the ethics that should guide our soldiers in war?  Although this is an old question, it must be revisited in light of the peculiar situations in which our soldiers are called to act in the 21st century.  Do the same  principles apply when we engage in war through automated drones or cyber warfare?  How is it possible to maintain ethical principles when confronted with the brutality of those who refuse to distinguish between combatants and civilians?  For guidance, this talk returns to ancient political thought, which grappled with questions both of war and of character, and in particular to Plato’s Republic, where Socrates outlines an education for warriors and the nature of a healthy soul that suggests different grounds for ethical actions, grounds that may provide a superior model for our complex times.