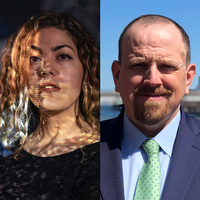 REGISTER FOR THIS HYBRID EVENT HERE

A Father’s Lullaby: Co-creating Ecosystems with Communities, Media and Technology Towards Systemic Change

In order to reimagine social paradigms and redesign systems, there is a fundamental need to redefine processes so that they become the embodiment of the changes envisioned. Processes are not simply neutral paths, but the manifestation of social and political forces and can perpetuate inequities and amplify the same social constructs that we aim to change. In this talk, Rashin Fahandej and Jeff Smith discuss the multi-year initiative A Father’s Lullaby and the role of media, technology, and community co-creation to create new social structures that make visible unconventional forms of solidarity and criticality across differences. These processes are based on philosophies of care and individuals’ direct action toward systemic change. This session shares the process and outcome of a pioneering initiative between Emerson College and the U.S. Federal Probation office in Boston.

Rashin Fahandej is an award-winning artist, independent filmmaker and assistant professor of emerging and interactive media at Emerson College. Fahandej is the founder of A Father’s Lullaby, a multi-year community co-creative initiative that highlights the role of men in raising children and their absence due to racial disparities in the criminal justice system. Fahandej is the recipient of the 2021 Prix Ars Electronica Award of Distinction and 2019 Foster Prize at the Institute of Contemporary Art Boston. She has served as a Boston Mayor’s Office Artist-In-Residence and lead artist at American Arts Incubator Austria at ZERO1 and the U.S. Department of State’s Bureau of Educational and Cultural Affairs. A proponent of “Art as Ecosystem”, Fahandej defines her projects as “Poetic Cyber Movement for Social Justice”, where art mobilizes a plethora of voices by creating connections between public places and virtual spaces.

Jeff Smith completed his undergraduate studies at Stonehill College and his graduate studies at the University of Massachusetts in Lowell. He has been employed with the U.S. Probation Office in the District of Massachusetts since September 2001 after working for several years as a state probation officer at the Brockton District Court. During his time with U.S. Probation, he has worked in several roles as a field supervision officer, presentence investigator, specialist, and supervisor prior to his appointment as an Assistant Deputy Chief in early 2021. In 2012, he started a fatherhood program for men involved in the federal probation system and has helped facilitate that program since it started. In 2018, he began working with Rashin Fahandej to expand the program to work with men completing their custodial sentence.

***This is a hybrid talk that will take place in-person at MIT AND on Zoom.
***Reminder that masking indoors is currently required at MIT regardless of vaccination status.
***In-person attendees must be registered in MIT’s CovidPass system. All others can join online.