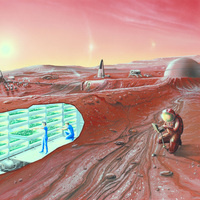 Given the enormous impact that colonialism has had, and continues to have, in the United States, scholars frequently look to our colonial past to understand the American present. This focus on the past, though valuable, has discouraged attention to newly emerging colonial enterprises. Perhaps one of the more conspicuous neo-colonial projects has been the push towards planting human colonies on Mars. In James Wynn’s talk, he will explore one of the many problems addressed by the rhetoric of this current colonial moment: How do you persuade people to leave their indigenous communities to start new ones in a foreign and sometimes hostile place? To explore the current rhetorical solutions to this problem, Wynn will assess the strategies used by science fiction writers to help audiences imagine life and human settlement on Mars. By comparing their efforts to lure people to the red planet with the “promotional literature” created by supporters of the English colonization of North America in the early modern period, he will show that though these colonial enterprises face similar rhetorical challenges, the material-historical contexts in which they occur significantly influence the available means for addressing them.

James Wynn is Associate Professor of English and Rhetoric at Carnegie Mellon University. His research and teaching explore science, mathematics, and public policy from a rhetorical perspective. His first book Evolution by the Numbers (2012) examines how mathematics was argued into the study of variation, evolution, and heredity in the late nineteenth and early twentieth centuries. His most recent monograph Citizen Science in the Digital Age explores how the Internet and Internet-connected devices are reshaping the landscapes of argument occupied by scientists, lay persons, and governments. Currently, he is awaiting the publication of Arguing with Numbers, a collection of essays co-edited with G. Mitchell Reyes whose contributors investigate the relationship between rhetoric and mathematics. He is also working on a new book project on the rhetoric of Mars colonization.