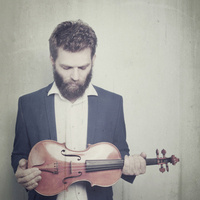 Gandelsman performs all six Cello Suites in a solo performance in Kresge Auditorium as part of the MIT Sounding series.